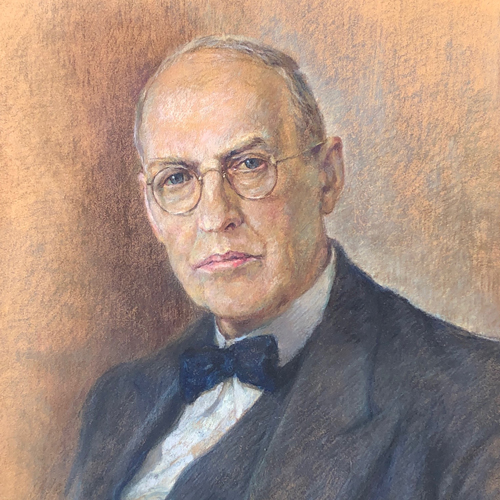 The Macnab motto was, “Timor Omnis Abesto” (“Be all fear absent”). The daily life of Daniel Stewart Macnab, from boyhood to his death in 1951, was reminiscent of these words, including in his founding of the Associate Physicians and Surgeons of Calgary, later becoming the Calgary Associate Clinic, and subsequently Associate Clinic.

“He was big, physically and mentally with a limitless power of work, always animated by a driving passion for medical practice. In the early days, there was a leonine touch about him, but this was never more than a fleeting impression quickly replaced by the sense of coiled steel in the man. The face was keen…the eyes were level and inquiring; the smile was that of a strong jaw, which could be set with a Scots tenacity that was not stubbornness. At rest, like most big men, he almost lolled in his chair. In action, he strode the world confidently and at work, his movements were quick and incisive. He was always direct. He was not talkative, but easy in speech. The voice was moderate, but when he was roused, it boomed like an Atlantic gale. The mood was capable of the most astonishing range from kindly tenderness to testy petulance to towering rage…a stalwart clansmen…working out his destiny with a stethoscope and scalpel in the less rugged hills and plains of Alberta.”

Born October 28, 1951, in Malagash, Cumberland County, Nova Scotia, he was the eldest son of his mother’s second marriage. Taught a strong work ethic from his mother, Stewart was required to take over the family farm at age 15, along with his younger brother, Ira, age ten, when his father became seriously ill and subsequently passed away. Young Stewart was required to give up his studies to help the family until an older half-brother arrived, which allowed Stewart to continue his schooling. He assisted on the farm, studied, and worked in the oyster beds by his home on Saturdays to earn the extra cash required to purchase higher education.

At age 18, he made his way to Providence, Rhode Island, where he lived with his half-sister and worked for a year in a soft-drink plant and dairy (in its maple sugar section). These earnings took him to Colchester County Academy and the Provincial Normal School at Truro, Nova Scotia, for his grade-eleven and first-class teacher’s license. He subsequently taught at the Malagash Rural School for $300.00 per year for two years until he could afford tuition to New York University and Bellevue Medical College. During this time, he lived with his half-brother. Despite offers of financial assistance from his brother, Stewart was determined to make his own way. While in medical school, he led his class each year and was described as bright and enthusiastic, and upon graduation in 1907, he joined Bellevue Hospital and served as an intern and house surgeon for three years.

Stewart married in 1910, but, unfortunately, he spent his honeymoon alone as he became ill with diphtheria. He made his way to Calgary, Alberta, to recover his health.

When he first arrived in Calgary, he practiced medical contract work, which was not received well by the other physicians in the city. Eventually, the Holy Cross Hospital opened its doors and its operating room to him and advised him that they would stand by him through “thick and thin.” While at the Holy Cross Hospital, he practiced kind-hearted, excellent medicine twenty-four hours a day, seven days a week, often to the point of exhaustion.

Perhaps his main fault, according to his friends and associates, was that he ”…practiced the loudest, unprintable cuss words in the community.” This failing was compounded by the fact that he had a remarkably resonant voice that would travel quite a fair distance. His bad language in the operating room was well known, particularly in intense situations. When the surgery was complete, he would go around to every nurse in the room to personally thanking them for their hard work and apologizing for his enthusiastic language that was said in his excitement.

Dr. Macnab was passionate about improving the quality of medical care available to Canadians. In order to accomplish this, he was active in several organizations. He sat on the executive Calgary Medical Society for several years, and he was elected president of the Alberta Medical Association in 1935. He was also appointed Chairman of the Western Canada Division of the American College of Surgeons. He would often travel around Alberta, talking with various groups, and helping to organize the first rural district medical societies.

Dr. G.D. Stanley wrote, “Unquestionably, his biggest and most worthwhile task was the assembling of a group of capable, middle-aged medical and surgical practitioners on December 1, 1922, to organize his dream, and the keeping together of enough of them, along with a succession of competent additional doctors, to maintain and promote that which has grown during the process of years to be the Calgary Associate Clinic.”

Within the clinic, he was devoted to the well-being of his patients rather than financial gain. He was adamant that the patients of the clinic receive the best medical care regardless of his or her financial status. He was considered everybody’s friend; he was much loved and respected by his patients.

Macnab worked at a frantic pace until 1948 when he became permanently incapacitated with a serious illness as a result of a pituitary tumour. He was given a room at the Holy Cross Hospital where he died in 1951.

Dr. Daniel Stewart Macnab, as stated by Dr. E.P. Scarlett, was ”an ambitious soul who could look back on a busy and successful career as a physician-surgeon from the time when as a boy and determined to emulate the example of his older half-brother, Dr. George David Stewart, who had become a famous New York doctor. His career was forged by work and driven by the power of single-mindedness, such as one may see only in saints or in fanatics…He was never happier than when shouldering his way through a staggering operation schedule in the morning, facing a crowded consulting room in the afternoon, and visiting a hospital full of patients in the evening. The practice of medicine was to him a battle, and he must always be in the thick of it.”.

McNeil, D.L. Medicine of My Time. Calgary: University of Calgary, 1983.