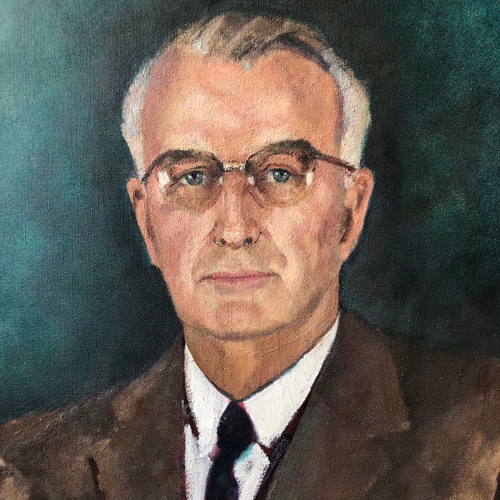 J.S. Gardner, in the Canadian Bulletin of Medical History, stated, “Earle Parkhill Scarlett was a man of distinction and culture. He was a classical scholar, author, historian, musicologist, and physician. He was sustained in these roles by his intellectual vigour, abiding faith in truth, and goodness.”

Although not a founding member of Associate Clinic, the remarkable life of Earle Parkhill Scarlett played an essential role in the history of the Clinic.

Scarlett was born June 27, 1896, in High Bluff, Manitoba, a small hamlet near Portage La Prairie. He was a lone surviving twin and the eldest of four children. Scarlett and his siblings were raised in a missionary parsonage that provided a wide-ranging library. His first memories were about the abundance of books he could pull off the bottom shelf of his father’s study. The family would move quite often, which was not conducive to obtaining long-term friendships, and books became his constant companions. Scarlett would continue this appreciation of both reading and writing throughout his life.

Earle graduated from the Winnipeg Collegiate Institute at age fifteen and entered Wesley College. Scarlett worked at whatever he could find in order to pay for his education. He worked as a store clerk, a construction camp labourer, and a train sleeping car conductor.

Military service called for Scarlett in 1915, with the start of World War I. He joined the Western University Battalion. By December 1916, he was on his way to the Western front, and in September 1917, he was transferred to the Machine Gun Corps. During his time on the Western front, he survived his first German machine-gun attack, despite a jammed gun, and a mustard gas attack in 1918. He was severely injured at the Battle of Arras when he received a shrapnel wound in his neck, one that killed several of his companions.

Following the seven long months of hospitalization and rehabilitation, Scarlett needed to consider his career options. In typical Scarlett fashion, he researched and spoke to many of his father’s professional friends. During these discussions, he learned that only two individuals were happy with their work; both were physicians. The decision was made, Scarlett would enter the University of Toronto to study medicine. His fiancée, Jean Odell, was also attending and earned a Bachelor of Arts degree.

During his five years at the university, Scarlett convinced his fellow undergraduates to start the University of Toronto Medical Journal. It was the first undergraduate medical journal on the continent and continued despite admonitions that it should not.

Graduating in 1924, Scarlett married and found work in Detroit, where he became a Medical Fellow at the Henry Ford Hospital. Three years later, the family moved to Iowa City, where he served as Associate in Medicine at the university. While in Iowa City, Dr. Scarlett made a particular study of heart disease and mastered the electrocardiograph. Dr. Scarlett had a desire to return to Canada. His mother suggested he write to a lawyer she knew, R.B. Bennett. At the time, Bennett was a Calgary West M.P and soon-to-be Prime Minister of Canada. Bennett happened to be a longstanding political friend of G.D. Stanley, who was MP Calgary East and a founding member of Associate Clinic. A job offer from the Clinic soon arrived, and Scarlett and Jean headed for Calgary in 1930. The first thing Dr. Scarlett did was start a library in the furnace room.

Dr. Scarlett was first regarded with some suspicion in Calgary, as he had brought the first electrocardiograph into town. Very soon, however, he became highly respected by doctors and patients alike.

At the Clinic, Dr. Scarlett began to initiate evening meetings devoted to presenting paramedical or medical historical topics. These meetings eventually led to a library, complete with a full-time librarian, a photo gallery, and, along with Dr. Stanley, the development of the Calgary Associate Clinic Historical Bulletin (CACHB).

Between the years 1930 to his retirement from the Clinic in 1958, Dr. Scarlett became heavily involved in community, educational, medical, and musical organizations (he and his wife even became playing members of recorder groups). He became president of the Clinic, succeeding the Clinics founder Dr. Macnab, in 1946 and remained president until his retirement.

Upon his retirement in 1958, he would continue with studying, writing, lecturing, and travel. He wrote for numerous publications. Dr. Charles Roland, who interviewed Dr. Scarlett in 1972, stated that Scarlett remains unsurpassed in writing so voluminously on the art, science, and the history of Canadian medicine. By the end of his life, Scarlett had written approximately 450 articles and papers; these exclude his sixty-three CACHB columns and editorships of its eighty-eight issues.

J.S. Gardner stated, “In reviewing the life of Earle Parkhill Scarlett, one is soon impressed with his awesome industry in the literacy world, allied with his broad interests and explorations and skill in medicine, medical history, and the arts. With all of it, this gentle man displayed a profound faith and a quaint humility that seemed to guide his lifestyle.” It was his “…firm belief that our ultimate aim in this world is to live in the knowledge of the absolute values, truth, goodness, faith, and beauty.”

Dr. Fred McNally referred to Dr. E.P. Scarlett as “a brilliant scholar, a Doctor of Medicine, a Doctor of Laws, a veteran of World War I who bears in his body the devotion to his country, champion of the Humanities, inspiring teacher, able administrator…a citizen who is the pride of his community and a great Canadian.”

He was a member of: