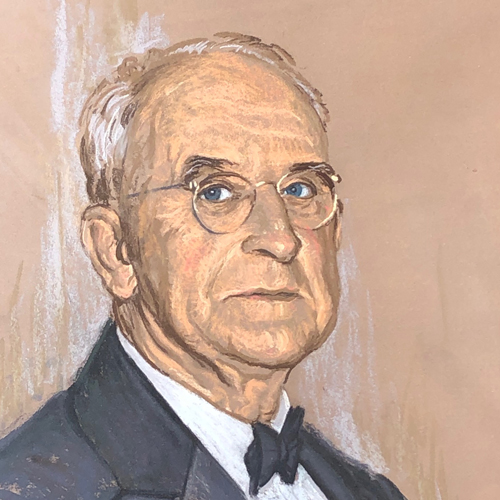 Dr. E. P. Scarlett, when writing about Dr. George Douglass Stanley, states, “He had high scrupulous standards as a physician and practiced the exacting discipline of his profession all his life, keeping himself abreast of the rapid and bewildering developments…but above all, he had a spiritual and historical love of medicine which glowed in his mind like an altar lamp.”

George Douglass Stanley was born in Exeter, Ontario, on March 19, 1876. Shortly afterwards, the family moved to St. Mary’s. It was here that he obtained his early education. During his years at high school, he played lacrosse, and after his graduation at 18, he attended Stratford Model School and proceeded to teach the lower grades at $250.00 per year. At the age of 20, he enrolled at the University of Toronto and entered the Faculty of Medicine, “Class of 1901.”

During his clinical clerkship, he and a friend offered to treat four advanced tuberculosis patients, and in October 1900, he was required to enter into the Muskoka Sanitorium at Gravenhurst with tuberculosis. While there, he met his future wife, wrote his final exams, and formed the “Lunger’s Fellowship Club” (a group he kept in touch with all his life).

During summer 1901, Stanley was feeling extremely discouraged as he had just suffered some pulmonary hemorrhages. While walking, he happened to meet one of his professors from the university, Dr. McPhedran. Dr. McPhedran was quite shocked to see how sickly Stanley looked and gave him this advice “…If you have any notion of continuing to live on for a while, get out of here at once, go way out to Alberta, take lots of her fresh air and sunshine, and forget your disappointments.” Many doctors at the time felt that the climate in the west was extremely suitable for those with respiratory ailments.

Stanley took this advice and, along with his brother, Van, made his way to Alberta by borrowing the fare of $37.50 for a harvester’s excursion and arrived in Calgary in July 1901. While trying to decide where to live and set up his practice, the only advice he received was not to go to High River, so he proceeded forthwith to High River. “Dr. Stanley found himself amongst gamblers, cowpokes, homesteaders, and drunks…through a combination of luck and skill, he quickly established himself in this remarkable community.”

In November 1903, Annie Colvin came to High River to marry Dr. Stanley, whom she had met while he was recovering from tuberculosis. As they were about to depart for their honeymoon in Banff, a frantic knock came to their door. It was a rancher pleading with Dr. Stanley to go and attend to his wife, who was in labour. Dr. Stanley was quite upset as he was to depart for his honeymoon, but his new wife encouraged him to go; such is the life of a doctor in rural Alberta. They did eventually go on their honeymoon…twelve years later.

While in High River, he owned and operated the first hospital between Calgary and Fort MacLeod. He was quite active in politics and various medical organizations. He reached the legislature in 1913 and remained there until leaving for Calgary. He also helped to build the town’s first Methodist Church.

After almost eighteen years in High River, Dr. Stanley became severely ill with the Spanish flu and subsequently developed pneumonia after going out on an emergency call. When he was finally able to leave the hospital, he realized that rural medicine was becoming too strenuous for him and that a quieter practice in Calgary would suit him better.
In Calgary, Stanley practiced solo medicine for two years. During this time, he was president of the College of Physicians and Surgeons of Alberta. A motion was brought forward by the College that dependents of workmen be included in the Workmen’s Compensation Act. Dr. Stanley was called before an extremely perturbed Calgary Medical Society, of which Dr. Daniel Stewart Macnab was a member. Stanley, even though he agreed with the opposition, felt that is was essential to support the College position. He said, ”Since coming to Calgary a couple of years ago, whenever I am faced with a question respecting medical procedure, I have learned to follow one invariable policy, and that is to find out what certain doctors in Calgary would do, and then do the opposite.” Macnab was so impressed with Dr. Stanley’s courage that he asked him to become one of the five founders of Associate Clinic in 1922.

Dr. Stanley established himself at the clinic, and in the 1930s, he took charge of the insurance examinations, which provided the clinic with the bulk of its income during the Depression. These exams were a particular field of medical practice in which he was entirely devoted.

One of Dr. Stanley’s significant contributions, along with Dr. E.P. Scarlett, was the development of the Calgary Associate Clinic Historical Bulletin.

Dr. Stanley was chairman of the Board of Governors of both the University of Alberta and Mount Royal College. In 1951, he received an L.L.D. From the University of Alberta in recognition of his contributions to Canadian life. He was also awarded the King George Coronation Medal in 1937 and became an honorary life member of the Canadian Medical Association in 1950. Despite these accolades, Dr. Stanley set very high standards for his work as a physician and was much loved by his patients.

One of Dr. Stanley’s patients, who later became a reporter for the Vancouver Daily Province, stated ”It used to be quite a privilege to be sick in our house…Dr. Stanley had white hair and a slight limp and a rich laughing voice that you could hear as soon as he stepped on the porch. And as soon as you heard it, absolutely everything was okay no matter how bad it had been before. You would stop being tense or scared because he was there.”

Dr. Stanley continued to work at a demanding pace until two weeks before his death in 1954.

“With the passing of Dr. Stanley, something distinctive and memorable in the life of the West came to an end. He was one of the last of a generation of men and women who, in the nineties and at the turn of the century, came from the East and gave their heart and soul to the building of this new Western land. In this spirit, he worked mightily in his profession and public life.”